Welcome to the official site of Montana Samara Estates!

The Province of Guanacaste, Costa Rica 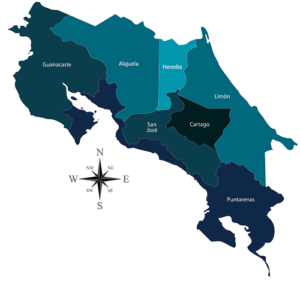 Guanacaste is Costa Rica’s northern most province that stretches from the Nicaraguan border on the north, down to the Nicoya Peninsula in the south. In between it has hundreds of miles of Pacific coast. This, of course gives you hundreds of uniquely beautiful, often pristine beaches giving you a huge range of choices as to how you spend your time on Guanacaste’s coast. You can choose from very wide beaches that stretch for miles down to small coves encased by dry rocky points. These beaches offer everything from worlds class surf breaks to protected bays with clear water for gentle swimming and snorkeling. 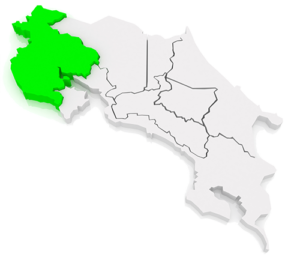 With the Pan-American highway running down its middle, as well as being home to Costa Rica’s second international airport, Guanacaste is easily accessible from almost any other part of the country. From downtown San Jose to Liberia, Guanacaste’s capitol and the gateway to many of its beaches, is 3 ½ hours “straight shot” up the Pan-American Highway (as straight a shot as you can get in such a mountains country). You don’t have to go through Liberia to get into Guanacaste, though. You can take a couple of alternate routes. You can drive to Puntarenas, a 2 hour drive, and then take the ferry from there to one of two ports located on the Nicoya Peninsula. You can also take “El Puente” (The Bridge) which spans the mouth of the Tempisque River over the Colorado Gulf (the preamble of the Nicoya Gulf) onto the Nicoya Peninsula. The turn off to the bridge is about 2 ½ hours from San Jose, and you would be in the city of Nicoya in 3 ½ hours. Nicoya is a hub for the region and peninsula. Which route you choose would depend on which beach you are visiting or the order of beaches you prefer. 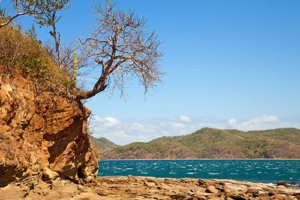 To go to some of the northern beaches like Playas Del Coco, Playa Hermosa, Playa Panama, or Nacascolo, or even further north to Santa Teresa National Park, you would go through Liberia. Flamingo and Tamarindo are borderline where you take your pick which route you prefer as the distance and time are about the same.  To go to Samara, Nosara or Carillo, the bridge is your best bet.

Guanacaste is unique from all other provinces in several major ways. It has expansive “Northern Plains” which is home to an ecosystem found no other place in Costa Rica; a Tropical Dry Forest.  It‘s home to the largest Tropical Dry Forest in the Americas. 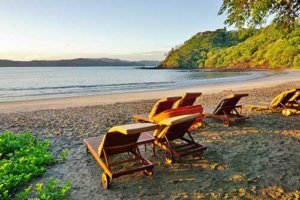 Guanacaste offers an equally huge range of accommodations to find the perfect one for everybody. There are 5 Star world famous resorts costing thousands of dollars a night to small backpackers’ paradise, and everything in between. There are high end resort towns, and small traditional fishing towns. You can eat anything from Kobe beef to fresh caught fish which you bought directly from the fisherman.

Long referred to as Costa Rica’s Golden Coast, it is world famous for the beauty and diversity of its beaches. So much so that until recently, the scope, beauty and depth of the ecological richness of its Tropical Dry Forest has been overshadowed. True, Guanacaste offers some the worlds prettiest beaches, but it also offers so much more. It is as diverse as Costa Rica itself. Its variety spans from the Rain Forests around Arenal up and over the mountains of Tilaran, and then down the coastal plains through savannas, mangroves, tropical dry forests and onto the beaches that made it famous.

Running from the north down towards the rain forests, on the eastern part of the province is the Guanacaste Mountains; a prominent almost straight line of beautiful sharp mountain peaks and volcanoes. This mountain rain is home to a large and ecologically varied collection of national parks: Parque Nacional Guanacaste, and Parque Nacional Volcano Tenorio and Parque Nacional Rincon de la Vieja, with its unspoiled waterfalls, bubbling mud pots and hot springs with an active volcanic crater, often called Costa Rica’s Yellowstone Park. All of this just along these mountains. Guanacaste is also home to several other active volcanoes and National Parks. There is Palo Verde National Park which has a huge mixed network of beautiful savannas, mangroves and wetlands, and it is also home to Santa Rosa National Park, which is where you have massive sea turtle nestings. 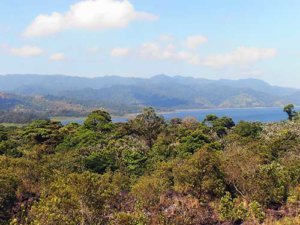 With so much to choose from in Guanacaste alone, why is Samara so perfect? For one; the weather. In Costa Rica you can literally choose your own weather depending on the altitude and the latitude. This is the key element in finding the right location.

Starting from about ¾ of the way down the south part of Guanacaste you are in the dry forest climate. Though nice during the rainy season when everything is green and there are no shortages of water, due to the very nature of the natural wonder that is the Tropical Dry Forest, it becomes dry and dusty in the summer. This not only keeps things with a layer of dust on them, it causes water shortages in many areas that have developed past the area’s ability to provide water for everyone during the dry season.

Any further south than ¾ of the way south and you are in the humid forest, along with its higher humidity and much more rainy days. No water shortages there, but hotter and stickier. This pattern continues as you travel further south.

Samara is all but straddling 2 climate zones. We are in a transitional climate zone. This has a ton of beneficial impact on the ecological diversity, but more directly to your comfort it means we have more precipitation than further north. This means a lot less of an arid environment, less dust, more greenery longer throughout the year and absolutely no water shortages. It also means we are not pounded 8 months out of the year with torrential rain falls, constantly high humidity and a generally more comfortable climate.

Samara is a perfect balance of chic restaurants and shops, traditional Costa Rican lifestyle, rural feelings and amenities. Guanacaste is a big, beautiful and diverse natural wonder with a ton to do and explore, but you may not want to live just anywhere in Guanacaste. With its multi directional accessibility,  Samara is perfectly located to easily explore not only the rest of Guanacaste, but all of Costa Rica. Come visit Samara, even for just a once in a lifetime visit and you may find yourself understanding why people who have discovered Samara don’t know how it is still one of Costa Rica’s best kept secrets.

Join our 4,345 guest and community members and get access to the latest news, freebies, project announcements and trip give-aways!

You are now subscribed, thank you!

There was a problem with your submission. Please check the field(s) with red label below.

Your message has been sent. We will get back to you soon!